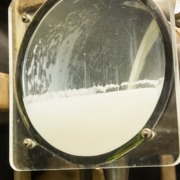 Congratulations to all recipients of our 2018/19 milk quality awards.

Only farms with fewer than five demerit points are recognised with these awards, and this year DFMC is proud that farms that received the awards represented about two-thirds of our total milk pool. The national winner was announced at the AGM in Kiama, NSW. The top award went to Manna Farms Holsteins from Yankalilla, South Australia. Ian and Nikki are no strangers to quality awards, having taken out the South Australia award two years ago. They say key to milk quality is doing the little things well and making sure cows are well fed.

The runner-up was MacArthur Stanham Holdings from Camden, NSW, who after missing out on featuring in the awards last year was determined to rise back up the ranks.

Interestingly both operations are located in urban fringe areas, with Manna Farms actually accessible via a street address, while the westward spread of Sydney and having suburban neighbours is something Adam and his team at MacArthur Stanham have to consider on a day-to-day basis.

In Far North Queensland, our regional awards were presented in conjunction with the Sub Tropical Dairy Dinner and attended by 80 local farmers and service providers. Our regional award was presented to Kevin & Sharron Collins and accepted by San Collins.

In South Australia, the regional quality award winner was Ian and Nikki Willcocks from the renowned Manna Farm Holsteins of Yankalilla. The runner-up came from just up the road at Myponga – Jared and Megan King. Again, South Australia had experienced a tough year that culminated in a reasonable, but quick, spring and the focus on quality from the region’s suppliers throughout the season was admirable. Quality certificates were awarded to The Barlett Family Trust, A & D Dalitz, James & Chris Zerk, RG BI & KM Bond, IA & LC Gazzola, and Blinkbonnie Pty Ltd.

The North East Victorian function was held at the Beechworth, where a great night was had.

Ray Perkins and Shirleen Evans were announced as the Victorian Regional winners. Ray and Shirleen also had the distinction of being among Dairy Australia’s Top 100 suppliers in Australia, based on BMCC, . Quality certificates on the night were presented to Wild Dog Creek Pastoral Company, JP & ER Pethybridge and JJ & BL Evans. A Runner Up Jared King with local director Adrian Dauk. The DFMC Annual General Meeting (AGM) was held in Kiama, NSW on November 19th. This year we kicked off the day with an open forum in the morning, followed by the formalities of the AGM, and then a lunch during the presentation of the NSW South Coast quality awards.

We were privileged to hear from two highly credentialed and topical speakers during our open forum, with the head of the NSW Farmers Dairy Committee, Colin Thompson, and the recently appointed NSW Dairy Advocate, Ian Zandstra, giving us plenty to think about. Given current discussion around the Australian Dairy Plan, both were able to provide wonderful and interesting insights of their respective roles.

Chairman Andrew Burnett then led a Q & A session for members on co-operative matters. Andrew opened the AGM, presenting his Chairman’s report, highlighting the responses to the drought including Lion’s True-Blue drought fund and the Dairy Pride payment.  He also reaffirmed the importance of the 3-year extension of the Milk Supply Agreement and the key points – dispute resolution, the revised aggregation fee of $300k and that the MSA is no longer exclusive.

This was followed by an operations report from Executive Officer Mark Kebbell, highlighting the drop in milk production in all regions. Finally, a finance report from Chair of the Audit and Risk Committee, John McKillop highlighted that the co-operative’s operating profit (after income tax and before dividend) was $676k for 2019.  The equity portfolio continued to grow – at a little over 10% again for the financial year to $13.4m

As advised in the days leading up to the AGM, the co-operative’s Annual Report can be found on the DFMC website at http://dfmc.org.au/operation/dfmc-annual-reports/.