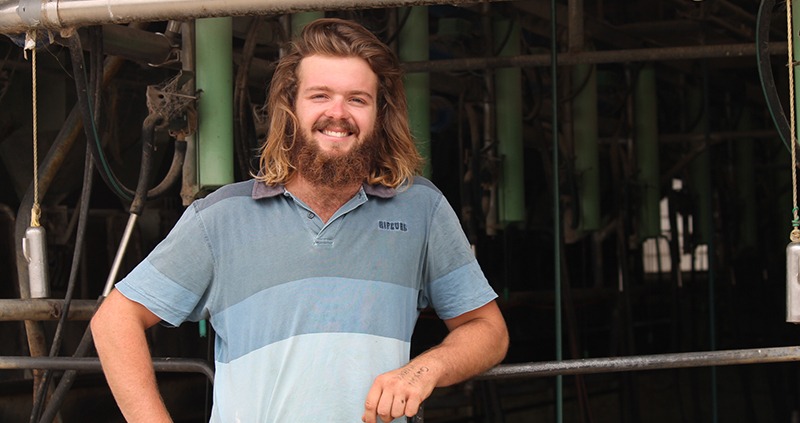 Three generations of the Gazzola family work together to run a dairy farm at Jervois in South Australia.

Who: The Gazzola family

What: Milking up to 200 cows, predominantly Holsteins

The youngest family member who works full-time on the farm is Rupert. The 23-year-old loves dairy farming, especially working with animals. While he continues to learn from his parents and grandparents, he is also excited to help modernise the 1700-hectare farm.

Rupert returned to the farm after studying agricultural sciences at the University of Adelaide. Even during his studies, he returned home to help whenever he could.

As with the other family members, Rupert has his area of responsibilities on the farm – he takes the lead on managing the 100 hectares of pasture and the herd. They are milking between 180 and 200 cows.

Rupert milks with his Nonna (Grandmother) Luisa every afternoon. Other family members share the milking duties, with an employee helping three mornings a week – but always with one of the family members.

Whenever possible, the Gazzolas like to do things themselves, right up to fixing machinery thanks to Rupert’s father Dino and Rupert’s brothers’ qualifications.

“When we put the extra care into it all, we find it just runs smoother,” Rupert added. 23-year-old Rupert takes the lead on managing the 100 hectares of pasture and the herd.

The family takes pride in their cows’ longevity – the oldest cow in the herd, which still gets in-calf and produces, is 18 and there are a handful that are 15 and 16 years-old.

“We don’t work them too hard and we use reliable bulls,” Rupert said.

Luisa agreed that genetics plays a key role in longevity. The family has been buying bulls from the Rathjen family’s Glenjoy Holsteins stud at Springton, SA, since they started farming at Jervois in the 1950s. They have records of every cow that has been on the farm.

Rupert has added some Illawarra cows and Illawarra-crosses to the herd, and has also introduced artificial insemination (AI), which he hopes will boost production. Rupert has added Illawarra genetics to the herd and implemented AI in order to boost production.

In spring of 2017, the Gazzolas purchased cow collars for heat detection, and movement and ruminant monitoring.

The collars alert the family to any change in a cow’s behaviour earlier than they had been able to observe it previously, so they can check on an animal quickly and treat as required. The devices also pick up when a cow is on heat.

“Because we run the bulls with the cows all the time, it was getting hard to pick who was on heat and who’s mated so we were having to preg test all the cows. Now we won’t have to worry about preg testing so much,” Rupert said.

“Now we’ll be able to pick out cows that aren’t getting in-calf straight away and we can make the decision to sell them or treat them.”

The smart collars transmit signals throughout the day to a computer in the dairy.

“I can go through and have a look at the individual cow graphs and see what they’ve all been up to.”

Rupert said they write the data into books as well, so they can add notes too.

He said in the first five months of having the collar system, he can see how it will help them be more efficient, for example, they won’t milk cows that shouldn’t be in the herd anymore.

The family has also recently put in a variable speed vacuum pump in the dairy, which Rupert said should cut electricity costs.

They are also putting new and more efficient pumps for their irrigation system and are laser levelling ‘The Swamps’, as they call their river flat country, so the paddocks there can be flood irrigated more efficiently in the drier months. They regularly spread manure, put out fertiliser a couple of times a year and strip-graze these pastures.

Their pastures are predominately Lucerne and include various clovers, rye grass and a little bit of fescue. In winter, cows graze oats up on the slightly higher country.

“We’ve always got something growing regardless of the weather, with each plant species offering something different to the cows as well – a good feed mix is pretty important to making good milk,” Rupert said. The smart collars transmit signals throughout the day to a computer in the dairy. They help with heat detection and movement and ruminant monitoring. The family added a variable speed vacuum pump to the dairy.

Rupert said the family had the confidence to plan for and invest in these upgrades, regenerating pastures and more because they have been a Dairy Farmers Milk Co-operative (DFMC) member since 1997 when the DFMC integrated the Dairy Vale business who owned the dairy processing plant at Jervois.

“DFMC is secure. That’s why we’ve always stayed with them. They’ve always got a good price, a reasonable price. It’s just the security of it,” he said.

He said the Jervois plant had sold several times since then, and farmers supplying other companies had faced uncertainty.

The Gazzola family’s work ethic, cooperation and love for the industry will see them continue in dairying for many years to come.

Despite its challenges, Rupert said: “I just really love it.”

“I love being outside, love working with the animals. And, like Nonna said, it’s about family as well – milking together, and having a good chat and stuff, that’s really enjoyable.” Luisa and Rupert work in the dairy together each afternoon.