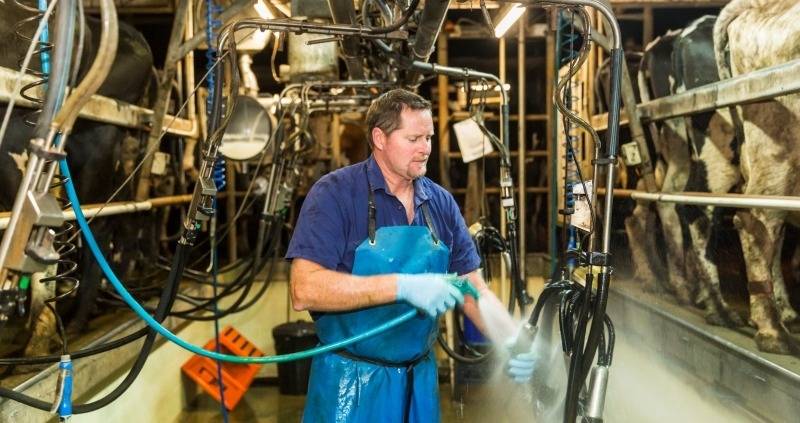 Returning to the family dairy just six years ago, DFMC member Dennis English is one of the new generation dairy farmers in the Malanda region in Far North Queensland.

With thoughts of returning to dairying at some point in his life and after some 15 years in Cairns working in construction and machinery, Dennis started to move his family back to Malanda in 2012. He picked up the reins to manage the 250 Holstein-Aussie Red cross milkers from his parents Peter and Veronica who remain involved in the business looking after the books and helping with milking. His sister Helen also milks every weekday. While Dennis was familiar with the work he knew many aspects of the business and industry had changed during his time away so he set about making sure he was equipped with the latest knowledge.

“There’s always plenty of news stories coming out in magazines and available on the internet for sub-tropical dairying,” said Dennis. “I do a lot of workshops and attend events – I try to get to as many of those as I can.”

With a “virtually guaranteed rainfall”, running a dairy in the region is quite different from other parts of the country but not without its unique challenges.

“The summer humidity here is probably the big one,” said Dennis. “Cows don’t really like being hot, they much prefer it if it’s nice and cool. The heat, the humidity, and being wet are probably the biggest issues.”

A covered feedpad helps to keep the cows cool and there is plenty of shade in the rye, clover and chicory-based paddocks, which are on a 20-day rotation.

“After the cows have been out in the paddock for the day, they can come back to the dairy around 1:30pm when it’s getting quite warm,” he said. “Then it’s a nice cool temperature drop once they get under that feedpad roof – so they can have a rest there, a drink, cool down, and then we milk at 3:00pm.” Milking routines have been one area that Dennis has focused on to improve the business and as a result milk quality has improved.

“We were getting issues with cows getting mastitis and high cell counts,” said Dennis. “We now flush the cups between each cow with fresh water and fore strip to check the milk quality before the cups go on.

“Milk quality has improved markedly because we’re on it all the time, and just having a routine and making sure everyone does the same thing – the more we stick to it the better everything goes.”

Dennis added that the most enjoyable part of the work is being able to witness each 12-month cycle – seeing how things went last year, and what he could do to make it better the following year. “Just tracking how production is affected by the things that happen in that 12-month cycle. Knowing that you can change what you do here or there and, fingers crossed, it’ll be better next year.”

He added that “over the last three or four years, the milk price stability has been a huge benefit to the whole region”, which he attributes to DFMC’s negotiating strength.