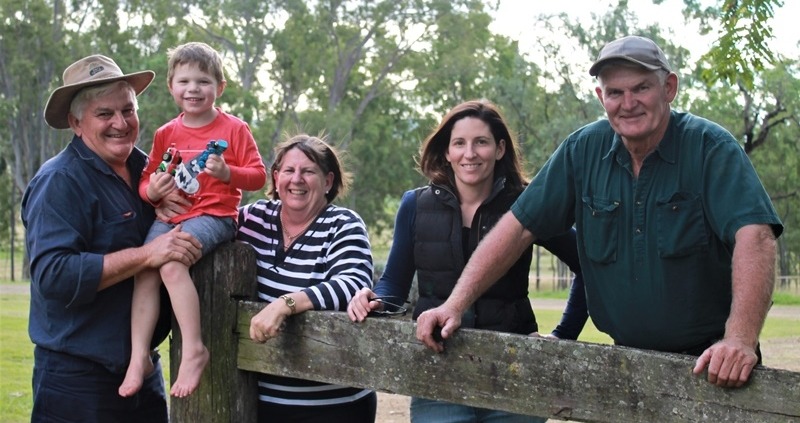 The bustling, busy house of Queensland-based DFMC dairy farmers Duncan and Mary McInnes reflects the energy and enthusiasm the entire family has for the dairy industry.

The three brothers of McInnes Bros Trust – Duncan, Ross and Morris – all work in the business and have various community commitments that occupy their time as well. Their Scottish grandparents John and Elizabeth McInnes started the dairy more than 100 years ago and the legacy looks likely to continue with some members of the third generation dairying as well.

They employ four full-time and four part-time staff including Morris’s son, Jason, and Ross’s daughter, Madeline. Morris’s wife Monica is also involved in the business, milking on a regular basis along with Mary looking after the bookwork. Duncan and Mary’s daughter Ruth Chalk also works in the industry for a joint Queensland dairy initiative in NRM – Dairying Better ‘n Better – and operates a dairy with her husband Geoffrey and his parents, John and Carol.

The McInnes Bros Trust doesn’t own land in its own right but leases land, including from family members, to run around 500 cows – mostly Friesians – on a partial mixed ration. Nestled in the Scenic Rim region of south-east Queensland with a view of the Great Dividing Range, the dairy produces around 4 million litres of milk a year.

“There is a future in dairying around there,” says Duncan. “Most consumers want to buy milk from the local area and we’re an hour out of Brisbane so we’re well positioned to supply it.”

The McInnes family is one of 50 DFMC members in south-east Queensland who, together, produce around 20 per cent of local production. All their milk goes to Brisbane, yet there’s still a gap in the market with sometimes up to 10 per cent of white fresh milk being imported from interstate.

“We should be able to be more competitive than bringing milk from Victoria or elsewhere even though the cost of production is dearer here. But at the moment we haven’t got enough milk to fill the bottles here,” says Duncan.

And it’s this opportunity for growth that gets Duncan excited.

“There is growth and opportunities here in Queensland and especially in south-east Queensland – it’s great for young farmers,” he adds. “We’re getting paid reasonably well. Of course, we’d always like to think there is a bit more to be had, but given the present situation with one dollar a litre milk we can’t expect to be getting much more than we are getting now.

“You can either grow by getting higher prices or you can grow by producing more volume. Many of our farmers have been able to grow for the last three to four years and we’re looking for every litre of milk that we can get hold of from them.” Since DFMC’s inception in 2004, Duncan has been a director and is currently Chair. Previously, since 1982, he was director on the local co-operative that – after five mergers – became part of Dairy Farmers. When Dairy Farmers sold the processing arm, DFMC was born.

“All the other co-operatives were processors,” he explains. “DFMC is a different beast, we’re just a collective bargaining group. But at the end of the day we are always trying to look after farmers and deal with farmer issues.

“Any collective bargaining group gives you the assurance that someone is doing that work on your behalf and in a professional manner. Although everyone should realise that the market will go up and down a bit to some degree.”

Focusing on supporting the industry at large and other dairy farmers seems key to Duncan’s approach. Their farm is relatively large but they still say they would not want to be negotiating one on one with a processor.

Mary sums it up nicely.

“It’s harder for smaller dairy farmers, we’ve got size by having three families that farm together and we produce four million litres,” says Mary. “But we prefer to be within the co-operative and in that collective group so we can all share in that ability to get the best price.

“The co-operative offers us security and strength in numbers. Individual farmers may not be very good at bargaining in their own right, but together we can be stronger.” “Selling milk at one dollar a litre – well, you’re never going to make too much money – for the processor or the farmer,” says Duncan.

And, as dairy farmers will be aware, it’s one thing for a processor to make a business decision not to make a profit on their milk when they may have other income streams or reasons for setting up their business that way. But for farmers it does make a difference, particularly for the long-term viability of their business.

Ross explains, “There are farmers who are not reinvesting in their farms– that’s probably the problem that we have. If the price isn’t high enough, the first thing that doesn’t get done is reinvestment on the farm.

“I have just done some rough numbers here and we need to reinvest 3 or 4 cents per litre of milk produced every year just to purchase new tractors, machinery and irrigation that we need. If we don’t reinvest in our capital, our maintenance goes up.”

And while it is key to prioritise farm investment in the ‘basics’ the family are also well aware of the need to step away from the business to assess their own performance and look for better ways to fundamentally do business.

They use QDAS (Queensland Dairy Accounting Scheme) and DairyBase to benchmark their business and spend time talking to other farmers to share ideas to improve their practices. For Ross, the promise of new technology is also a big opportunity for the industry and as a pathway to a better business.

“Breeding to produce animals that last longer and whose structural faults are corrected, that can give you a lot of satisfaction if you can improve the quality of your cattle,” says Ross. “Or when you a put in place a nutrition program that increases your productivity. Plus there are mobile phone apps that help you out and the prospect of virtual fencing.”

Both Ross and his niece Ruth talk about the opportunity for cow collars to monitor cow health that pick up on issues the cow might be having before they become a problem. Yet the challenge to adopt new technologies lies in understanding their costs and benefits and making sure they are road tested first to reduce risks.

“It comes back to weighing up the costs and benefits of all these things,” says Ruth. “There are some very successful people out there that are investing at the right times, in infrastructure and equipment which provides great paybacks. I think you’d pay back a lot of this quite quickly but you have to have access to the capital, the cashflow to support it, and the confidence in the future of your business and the industry.”

The McInnes are investing in and trying new practices and infrastructure themselves too. They have installed a new calving shed to better bring on the calves in the healthiest environment possible and a new glycol chiller for their milk. They are also feeding brewer’s grain – a byproduct from beer making that they source from Lion. It is very high in protein and moisture and is a good supplement for their cows. “I think there are going to be some really cool advances in dairy technology that are going to become more affordable over the next three years,” says Ruth. “We definitely need to be more positive about our industry and its prospects, we are the only ones that can change that. ”

“Dairy is still seen by the majority of the community as a food with high nutritional benefits and people still want to have fresh milk, which means that there is still a market for us to produce milk here. And, off the back of that, they still want to see their farmers to be paid a reasonable price.”

A passion for profitable crossbred cows
Scroll to top